Looking for lunch in all the right places. Portland, OR

For my next post, I thought of doing a 2016 collage and look back, but then I realized that I had this opportunity to do 2015 first.

About this time two years ago, I had just accepted an offer to work at Comcast Spotlight as an Advertising Account Executive. When I moved to the Portland area, I applied to Comcast, The Oregonian, and KOIN. So Villa, the sales manager at KOIN called the week I accepted the Comcast offer. I sorta wondered later if I had gone into broadcast sales rather than cable, if I’d been able to make it work better. But learning cable advertising while raising two kids with busy athletic and social schedules while Jereme stayed in Alaska for 6 weeks at a time was a challenge.  We decided to take some time to get better adjusted to our new life in a new state.

The rest (and best) of 2015 was spent focusing on eating good food. (Left to right) 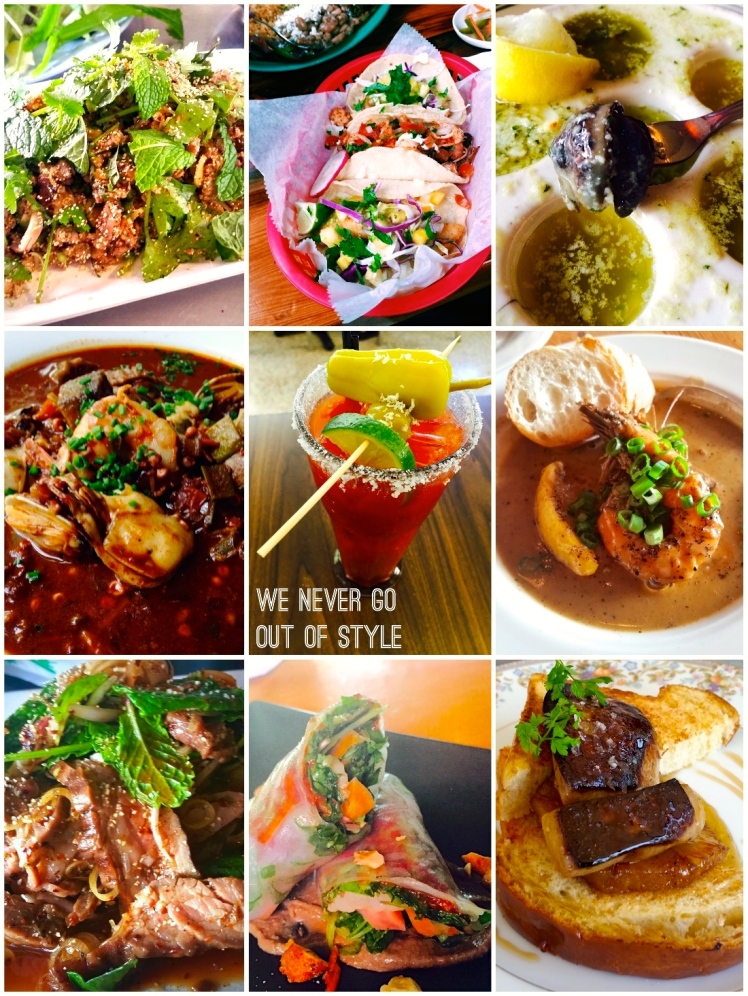 Pok Pok: The famous Vietnamese fish sauce wings there are so good, and a must have for an appetizer if sharing. Then there’s the flank steak salad with fish sauce, lime, chili powder dressing, mint, and cilantro. One of the best things I ate in 2015. My second visit to Pok Pok, I was shocked to see Andy Ricker walk by. I recognized him from Food Network features, and I followed him on Instagram. An actual chef/owner in their own restaurant in Portland. The more I found that it wasn’t so rare for many chef/owners, the more I loved this foodie town.

Por Que No Taqueria: My first visit was with Brittany for lunch. We went to the North Mississippi location, and she told me about the area. I had the Calamari, Camarones, and Lengua. I had a feeling about that place, and I now frequent the Hawthorne location often.

Jake’s Famous Crawfish: I loved the classic presentation of the Escargot there. I took Brittany and Jereme, and neither of them loved Jake’s like I did. So I didn’t really get to eat there as often as I wanted. Anyone else wanna go?

The Parish: This was one of the first places I visited the first week in town. I had read about Ethan’s Arkansas roots and studies at the French Culinary Institute in New York, and I was interested in meeting him. He actually knew about the small town I grew up in, and told me he had relatives there. The header picture of this blog is of the oysters from The Parish, and I was sad to hear it closed in 2016. I loved their gumbo, but now I’ll have to eat at EaT: An Oyster Bar, his other restaurant which displays the familiar Arkansas Razorback hat at the bar.

Urban Farmer: I submitted that bloody mary pic for a contest which I didn’t win, but I I thought the Taylor Swift reference was fun.

Acadia: As I made my way around Portland to taste all the new and renowned restaurants, I found my self going back to Acadia often, especially for the Louisiana Barbeque Shrimp. I love that they open for lunch at least one day a week, on Wednesdays.

Luc Lac: I had fun tweeting at these guys when I first discovered them. I have loved every single thing I’ve ever eaten there, and this Bo Thai Chanh (rare beef salad) is one of my favorite things to eat in the city. The pork and shrimp crispy rolls are also my favorite in Portland. They’re along the lines of how I make mine at home. Also Charles Phan style.

Smallwares: I didn’t get to eat at Smallwares as often as I wanted. The summer rolls shown above were from a tasting menu of a special dinner that we loved. We mostly had brunch there, and apparently enough that we got a “friends discount” once. I hope to see Johanna back so that I can eat more of her creative, tasty concoctions. RIP Smallwares.

St. Jack: I love the atmosphere, the location, and the foie gras. You’ll most likely see them in my 2016 recap as well. Loved watching the chef/owner Aaron Barnett on Food Network’s Chopped.

Check back soon for my 2016 recap! That one will be more difficult, probably…

This site uses Akismet to reduce spam. Learn how your comment data is processed.